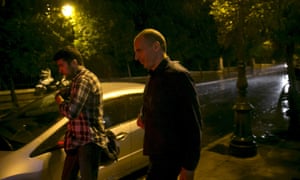 Email ThisBlogThis!Share to TwitterShare to FacebookShare to Pinterest
Ετικέτες ΕΛΛΑΣ 2015

PHOTO: Thousands of pro-Euro protesters gather in front of the parliament building in Athens.(Reuters: Jean-Paul Pelissier)
RELATED STORY: Greece will not make deadline for IMF repayment: finance minister
RELATED STORY: Grexit now a realistic prospect: analyst
MAP: Greece
Eurozone finance ministers have refused to extend Greece's bailout, Eurogroup president Jeroen Dijsselbloem says, as the clock ticks down to its expiry and a default.
Dutch finance minister Mr Dijsselbloem said it was too late to extend Greece's existing bailout and that the country's stance towards its creditors and eurozone partners would have to change before a new program could be agreed upon.
Speaking on Tuesday evening after an emergency conference call between the currency bloc's finance ministers, Mr Dijsselbloem said the council would meet again on Wednesday to discuss fresh proposals Greece would be submitting.

"The political stance of the Greek government doesn't appear to have changed," he said.
But Mr Dijsselbloem said any request for a new plan by Greece would only be considered after any referendum called by Greece's government and that any new program might impose tougher conditions than before.
Chancellor Angela Merkel of Germany stuck to Berlin's hard line when she said she also would not discuss any new Greek request until after Sunday's referendum.
"Before the referendum Germany can't negotiate a new request" for assistance, Ms Merkel was quoted as saying by a member of her conservative Christian Democrats.
Slovakia's finance minister Peter Kazimir tweeted: "Last deadline for Greece program extension was weekend" following a conference call to discuss the last-minute proposal.
"Due to parliamentary procedures, unable to extend program beyond today."
Finnish finance Miniseter Alex Stubb said an extension was "not possible" and said a request for a new rescue program with the European Stability Mechanism (ESM), the EU's bailout vehicle, "is always dealt with through normal procedures".
Earlier Tuesday, Greece had proposed a last-minute two-year rescue deal with the European Union to save the crisis-hit country.
"The Greek government today proposed a two-year agreement with the European Stability Mechanism (ESM) to fully cover its financing needs and the simultaneous restructuring of debt," the office of prime minister Alexis Tsipras said in a statement.
Mr Tsipras also requested a short extension to Greece's current bailout program to avoid a "technical default".

The decision not to extend the bailout came as thousands of people rallied in Athens in support of a deal with international creditors, which has been rejected by the Greek prime minister.

Five things you need to know

Who would be the real losers in the Greek debt crisis and how extensive will the fallout be? Here's five things you need to know about Greece's deepening economic woes.

At least 20,000 people, many waving European and Greek flags and blowing whistles, gathered in front of parliament in Syntagma square five days before a national referendum on whether or not to accept

The cry "resign!" sounded repeatedly through the crowds, with families, businessmen and the retired braving the rain to vent their anger against Mr Tspiras and his radical left Syriza party.
One banner read: "We will not become the last Soviet state".
Many carried flags of the European Union and chanted "Greece, Europe, democracy!"
Greece has debt worth nearly 180 per cent of its GDP after receiving two bailouts worth 240 billion euros since 2010.
Unemployment has more than doubled since 2009 to 25.6 per cent and pensions and benefits roughly halved between 2010 and 2014.
It now looks poised to become the first country to default on the IMF since Zimbabwe in 2001, and the wealthiest, in terms of standards of living.

Greece has requested for a key payment to the International Monetary Fund (IMF) to be postponed from its Tuesday deadline.
"We have filed a request with the IMF asking it to take the initiative to delay the payment until November," deputy prime minister Ioannis Dragasakis said in an interview on ERT television.
Only twice before — both times in 1992, and both times for much poorer countries, Nicaragua and Guyana — has a rarely used part of the International Monetary Fund's (IMF) charter been allowed.
The IMF charter says a borrower from the fund can request to delay repayment to a maximum five years from the date of the loan. The fund can decide without consulting its members.
The delay can be even longer if the fund's member states vote by a 70 per cent majority of voting power in support.
Such a move can be justified only if payment on the due date "would result in exceptional hardship for the member", the charter says.
The IMF has never made use of this clause which, in theory, would be open to Greece even if it would require support from most major and emerging economies.
The United States holds 16.7 per cent of voting power on the IMF board and the members of the European Union, together, around 30 per cent.
AFP/Reuters
Topics: business-economics-and-finance, international-financial-institutions, world-politics, greece,european-union
First posted
Αναρτήθηκε από EFHMERIS.blogspot.com στις 3:44:00 PM No comments: Σύνδεσμοι σε αυτήν την ανάρτηση Greek voices from the frontline of the debt crisis

Stock markets around Europe and Asia have fallen with growing fears of a Greek debt default and exit from the eurozone as the country's financial crisis deepens.
Here are some of the voices from Greece on how daily lives have been affected by country's money worries.
"I'm working 12 hours a day" - Theodoros Tzokas, Cafe owner
There seems to be a huge cloud of insecurity hanging over my head every day. My business which took me ages to build keeps suffering because I am losing customers every day. My loyal customers' behaviours keep changing on a daily basis because of this crisis.
I had to let all my good employees go, because I can't keep them anymore. I am working over 12 hours a day because I have no employees any more to help me out. It's really tough but there isn't much I can do.
I am not sure how long I can keep going like this. The only good thing is that I don't have to queue up for cash like most people because I have been putting money away at home for a long time. I knew we were going to have these crises so I made the decision not to save in the bank.
"There's simply no cash left" - Ilia Iatrou, former English teacher
Greece should continue to say no to the EU demands because the country can't take any more of the ongoing austerity measures. Frankly, the situation is unbearable over here.
My mother-in-law queued up for over an hour at the cash point just to be able to withdraw a small amount of money. I haven't tried to go to the cash machine myself, as we don't have much money left. There's simply no cash left in the system.
Some of us have been forced to now resort to a sort of barter system among ourselves because we have no money left. We just can't take any more of this, so we have to keep saying no to the EU masters. The EU can't afford to let us fail so we should continue to say no and they will blink and give us a better deal.
"This can't carry on" - Evi Stamou, Orthodontist in Athens
I run my own practice in Athens and am finding it hard to pay my employees. There is no cash in the system at the moment. My customers can't pay me so this is having an unfair knock on effect on my employees' pay.
Luckily, I took some money out a while back because I knew we would have this problem. The money is keeping me afloat at the moment but it's running out.
I queued at several cash points - which all ran out of cash - but eventually I managed to get money out from one of them. This can't carry on and I think we need a deal. Most people want out of the euro but I think it's a bad idea.
"We have lost all our employees" - Susan Benekos, British woman living in Greece for 28 years
My family business has suffered tremendously and we have lost all our employees, because there's no business. Recently, I couldn't take cash out from the bank.
The situation is dire and we are running out of money. We went to the cash point yesterday but couldn't get anything. The problem is many businesses are now accepting only cash and no cards so it's really hard to do anything.
This crisis is really destroying our lives. I have friends who have had to go live with their parents because they can't afford to pay their rent.
"Everyone is really tense" - Panos Spiropoulos and Katerina Karneris, run a coffee distribution business in Greece
The economy was beginning to pick up again late 2014 but now we seem to have gone backwards after the elections. The uncertainty is damaging our business. We don't know how we are going to pay our suppliers in the coming month since our customers are feeling the pinch from the crisis.
Frankly we have survived the crisis so far because we have been very diligent and put lots of money away. Just like most people we are all fearful that we will lose our money if Greece crashes out of the euro.
The laid back atmosphere in the country has also taken a hit making it difficult to express your political point of view in public without some sort of backlash. Everyone is really tense here making it hard to enjoy this beautiful country.
Produced by Nana Prempeh.
Αναρτήθηκε από EFHMERIS.blogspot.com στις 4:28:00 PM No comments: Σύνδεσμοι σε αυτήν την ανάρτηση